It seems a statement of the obvious, but bacteria don’t think.

Yet bacteria get around, and indeed are remarkably successful. Same with viruses. So thriving as a species does not require planning, studying, concentration and imagination, all the things we humans are so arrogant about.

And I’m not just talking about surviving, I’m talking about achieving the incredible. Think of the fungi that take control of ants, get them to climb up to a good spot and hunker down so that when the fungus bursts out from the corpse like a slow motion firework (see the picture) it’s got a fair chance of spreading its spores. 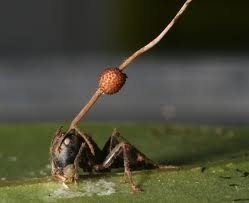 Did the fungus plan it? Of course not, the trick ‘evolved’ as the most successful of many different permutations, via, of course the process of natural selection.

Well, what about humans? We like to think we are the pinnacle of evolution with our big brains and our consciousness and our self-awareness. Our abilities to plan, co-operate and imagine have led us to dominate the planet. Or have they?

Surely these ‘real’ achievements are not ours to claim, but should also be laid at the door of the power of evolution, of the unstoppable force of trial and error, of the natural emergence of order from the chaos?